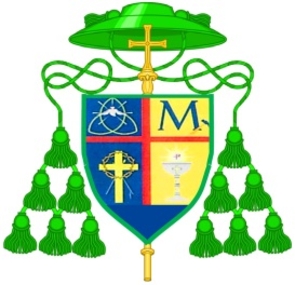 EPISCOPAL DECREE ON THE CHANGE OF NAME AND STATUS OF THE TRADITIONAL ROMAN CATHOLIC CHURCH TO THE SOCIETY OF ST. ALPHONSUS MARIA de LIGUORI
TRADITIONAL CATHOLICS

Directed by the Priestly Fraternity of St. Alphonsus Maria de Liguori, I, The Most Reverend Sherman Randall John Pius Mosley, Prime Bishop and Superior General, do hereby, by an act of the Synod of Bishops, did meet on, Friday, July 7, 2017, being the Feast of Ss. Cyril and Methodius, Confessors and being the year Two Thousand and Seventeen, at which time we approved the name change in order to avoid forming a new sect or conventical, for we are one church and part of that mystical body being the One Holy Catholic and Apostolic Church whose general ate is located in the United States of America and throughout the World, has for its vocation to bring together secular priests and put them at the service of the bishop and for the formation and sanctification of priests and future priests, ordained for the service of our mission chapels, parishes and priories.

In accord with the decrees of the 1917 Code of Canon Law concerning Religious Institutes and Societies we have produced a text for our constitutions. It was on the Sixth day of July, 2017, at a meeting of the Synod of Bishops called for said purpose to determine the future of our church, We presented these constitutions to the Synod for their review and approval. The Society does not have the canonical approval of the official church at this time because of the present crisis within the official church. The severe crisis in the Mother Church has caused her to depart from the traditional Catholic teachings and she has embraced False Ecumenism, False Interreligious Dialogue, Christian Liberty and the abuse of the Holy Sacrifice of the Mass. We as traditional Catholics will uphold the 1917 Code of Canon Law regarding Supplied Jurisdiction, which gives bishops the right to administer the sacraments to the faithful who ask for them. It is the church that supplies the jurisdiction ( ecclesia supplet)

(1917 Code of Canon Law: Canon 209;878; 882; 2252; 2252 )in order to protect the church from wolves in sheep’s clothing, to preserve the traditions of the church and primarily, the immemorial Mass known to us as the Tridentine Mass, of which Pope Pius V of blessed memory, codified in the Bull Quo Primum Tempore of 1570 AD, at Rome.

We have no power to change this Mass nor do We wish to abrogate the One Holy Catholic and Apostolic Church. We intend to uphold this church and all of its teachings prior to the Second Vatican Council, not out of nostalgia but because they have been tried and worthy of all acceptation. Thus we will not uphold any teachings of the modernist church which has caused irreparable damage to the faith.

To defend our cause at this time, we quote the Church Fathers concerning the present church crisis and how we ought to conduct ourselves in the House of God, the Pillar and Ground of Truth ………….

“Often, too, divine providence permits even good men to be driven from the congregation of Christ by the turbulent seditions of carnal men. When for the sake of the peace of the Church they patiently endure that insult or injury, and attempt no novelties in the way of heresy or schism, they will teach men how God is to be served with a true disposition and with great and sincere charity. The intention of such men is to return when the tumult has subsided. But if that is not permitted because the storm continues or because a fiercer one might be stirred up by their return, they hold fast to their purpose to look to the good even of those responsible for the tumults and commotions that drove them out. They form no separate conventicles of their own, but defend to the death and assist by their testimony the faith which they know is preached in the Catholic Church. These the Father who seeth in secret crowns secretly. It appears that this is a rare kind of Christian, but examples are not lacking. Indeed, there are more than can be believed. So divine providence uses all kinds of men as examples for the oversight of souls and for the building up of his spiritual people.”

St. Athanasius says, “May God console you! … What saddens you … is the fact that others have occupied the churches by violence, while during this time you are on the outside. It is a fact that they have the premises – but you have the Apostolic Faith. They can occupy our churches, but they are outside the true Faith. You remain outside the places of worship, but the Faith dwells within you. Let us consider: what is more important, the place or the Faith? The true Faith, obviously. Who has lost and who has won in the struggle – the one who keeps the premises or the one who keeps the Faith? True, the premises are good when the Apostolic Faith is preached there; they are holy if everything takes place there in a holy way … “Y ou are the ones who are happy; you who remain within the Church by your Faith, who hold firmly to the foundations of the Faith which has come down to you from Apostolic Tradition. And if an execrable jealousy has tried to shake it on a number of occasions, it has not succeeded. They are the ones who have broken away from it in the present crisis. No one, ever, will prevail against your Faith, beloved Brothers. And we believe that God will give us our churches back some day.

“Thus, the more violently they try to occupy the places of worship, the more they separate themselves from the Church. They claim that they represent the Church; but in reality, they are the ones who are expelling themselves from it and going astray. Even if Catholics faithful to Tradition are reduced to a handful, they are the ones who are the true Church of Jesus Christ.” (Letter of St. Athanasius to his Flock)

When the fire has died down in Rome and the present crisis of modernism and heresy has ceased and we are able to return to the Mother Church, if God permits us to return, We will present our Constitution to the Sacred Congregation for Religious and Secular Institutes. Until then, We must remain faithful to the One Holy Catholic and Apostolic Church outside of which there is no salvation. It is the present crisis which keeps us from that unity.

The only attitude of faithfulness to the Church and Catholic doctrine, in view of our salvation, is a categorical refusal to accept this reformation of this new church. This reformation, born of liberalism and modernism, is poison through and through; it derives from heresy and ends in heresy, even if all of its acts are not formally heretical. It is therefore impossible for any conscientious and faithful catholic to espouse this reformation or to submit to it in any way whatsoever. That is why, without any spirit of rebellion, bitterness or resentment, we pursue our work as traditionalists forming priests with the timeless magisterium as our guide.

I, Sherman Randall John Pius Mosley, a Successor of the Apostles, duly consecrated a bishop in the One Holy Catholic and Apostolic Church, on August 15, 2003 ( by duly consecrated bishops of Our Lord’s Church, whose Apostolic Succession descends from the See of Utrecht, being the Old Roman Catholic Church), approve the present Constitution and change of our Status from a separate church, named, The Traditional Roman Catholic Church, to a Society and Fraternity. Having had the opportunity to meditate upon so weighty a decision, on that same authority, We approve the change of name to, the Society of St. Alphonsus Marie de Liguori Traditional Catholics under the authority of the Superior General and the Priestly Fraternity of St. Alphonsus Marie de Liguori. We wait patiently for the day when We can present our cause to the Holy See for Apostolic approval. Until then, we are approved by this Our Authority.

This decree will be given to every bishop, priest and to the laity, to be read out in all of our missions, parishes, chapels, priories and seminary. This decree will be in English, Spanish, French and Portuguese and will be placed in the Archives of the Society and Fraternity on the condition that everything required by the law is observed.

It is the responsibility of every bishop, priest, seminarians, as well as the laity, to read the constitution and the life of St. Alphonsus Marie de Liguori, and to speak of themselves public ally as members of the Society, Traditional Catholics. All documents will be provided to you. The names of each Parish, Mission, Chapel, Oratory will remain the same, however, the name, of the Society is to be added officially and noted in the civil registrations of your respective regions. (Please refer to the sample provided.)

We hope to see the renewal of the Church through instructing many priests in the proper ecclesiastical spirit of the ancient Church, who will go out and give service to God wherever it will please Him to call them. We wish to do a service to God and render our service to the Church.

Given at this Ecclesiastical Province of which Our Seat is situated for the Clergy and Faithful in the United States of America on the Feast of Saint John Vianney, being the Eighth day of August, Two thousand and seventeen.